Our Top Pick For The Best Backup Cameras With Night Vision

Thanks for this remarkable invention! Backup cameras with night vision capability aid drivers to see objects directly behind their vehicle when backing, especially during the night. In the United States, all leased or sold vehicles will be mandated to have a fully working backup camera system by 2018.

This decision will enable cars, light trucks, and other similar vehicles to have a safety feature while reversing to avoid accidents resulting from this unaided maneuver.

Why Will Backup Cameras Be Mandatory In The U.S. In 2018?

The decision to require all vehicles to have backup cameras was influenced by the National Highway Transportation Safety Administration (NHTSA) of the United States and is embodied in the 2007 Driving Safety Act. This mandate is expected to minimize, if not totally eliminate, the mishaps brought about by the lack of visual aid while backing up.

In addition to this, according to the NHTSA, unintended back-overs result in more than 500,000 accidents annually in the United States alone. Of which, more than 15,000 include some type of injury while more than 210 deaths are recorded, mostly children aged 5 and below (31%) and elderly individuals aged 70 and over (26%). (3)

Unfortunately, still according to the NHTSA, these accidents mostly involved a member of the family, such as parents, brothers, and sisters (70%) who are behind the wheels. The NHTSA also confirmed that there are 1 to 2 children who are killed every week due to incidents of this nature.

What Are The Other Benefits Of Having A Backup Camera?

Aside from saving lives, which are mostly your loved ones, as the NHTSA has confirmed, having a backup camera installed in your car will give you some other benefits that can’t be bought by money. Some of these include the following:

How Does A Backup Camera Work?

Common backup cameras are small, wide-angle, and strategically positioned in the trim that surrounds the trunk lid or the handle. It is also pointed downward at a certain angle to have a better view of the surface near the vehicle.

The cameras are attached to the gear shift and also to the monitor or the rear-view mirror when you don’t have an infotainment screens. The mounting position of the backup camera must be unobtrusive and allows a perfect view of your rear. Here’s how a backup camera works:

How To Choose The Best Backup Camera

Some backup cameras utilize Bluetooth in sending video to the driver while others use wireless technology. There are still brands that offer wired connection, mirror mounting (as stated above), a difference in price, different in warranties, a variety of lenses used, and even cameras that flip open the moment you shift gear in reverse.

Choose the one that could be installed easily where you need only simple tools like a screwdriver or a drill.

Value for your money

The product should compensate for its price according to its immense features, functionality, and quality.

A rear view camera without night vision capability is useless during darkness. So, better find one with this technology.

The system to run a backup camera should not be too elaborate. The instructions and operations should be simple enough so even ordinary drivers can understand how it functions and can operate the camera easily (including accessories). 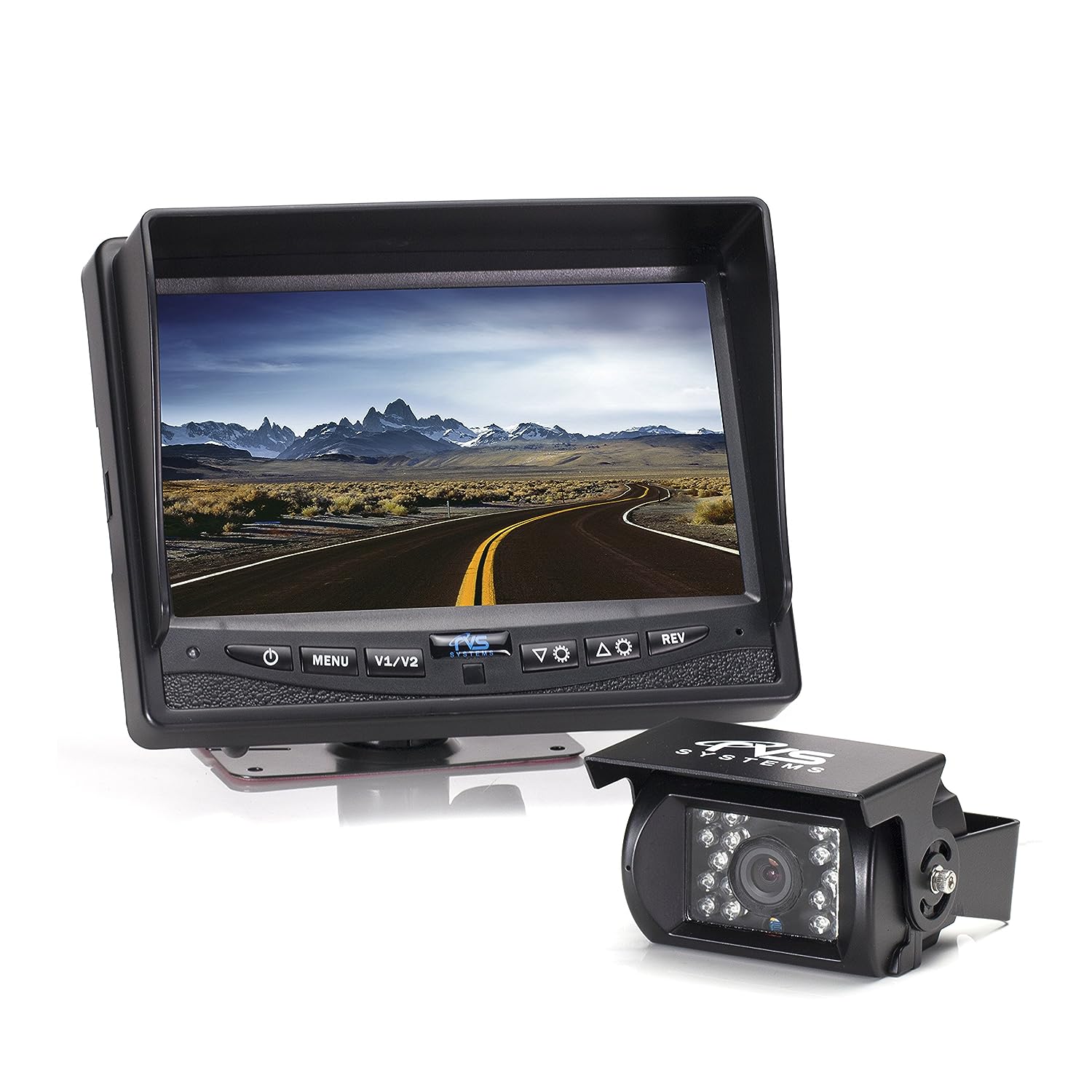 This backup camera from Rear ﻿﻿View ﻿﻿Safety (RVS) does offer safety and security after all. The RVS﻿﻿-﻿﻿770613 is a true waterproof product that works in any type of weather. Unlike conventional backup cameras, this product has audio capability where you can hear the sounds and aural info from the back of your vehicle. 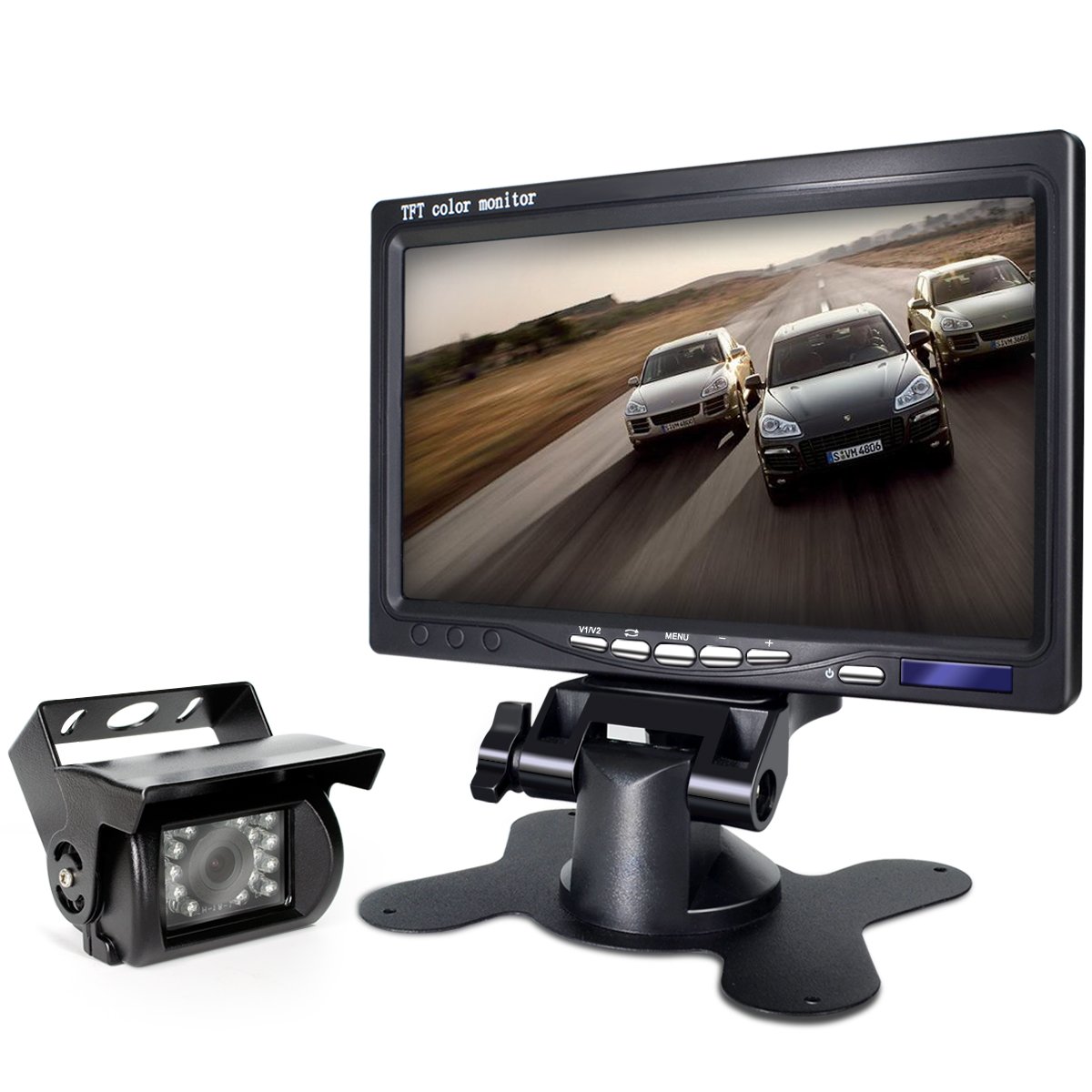 The eRapta ER01 is an IR (infrared) and a remote visible light camera capable of seeing your rear even in pitch darkness (night vision capability). Additionally, the cable delivers both video and its 12VDC from the camera to the monitor allowing for it to power the system from monitor end cable. 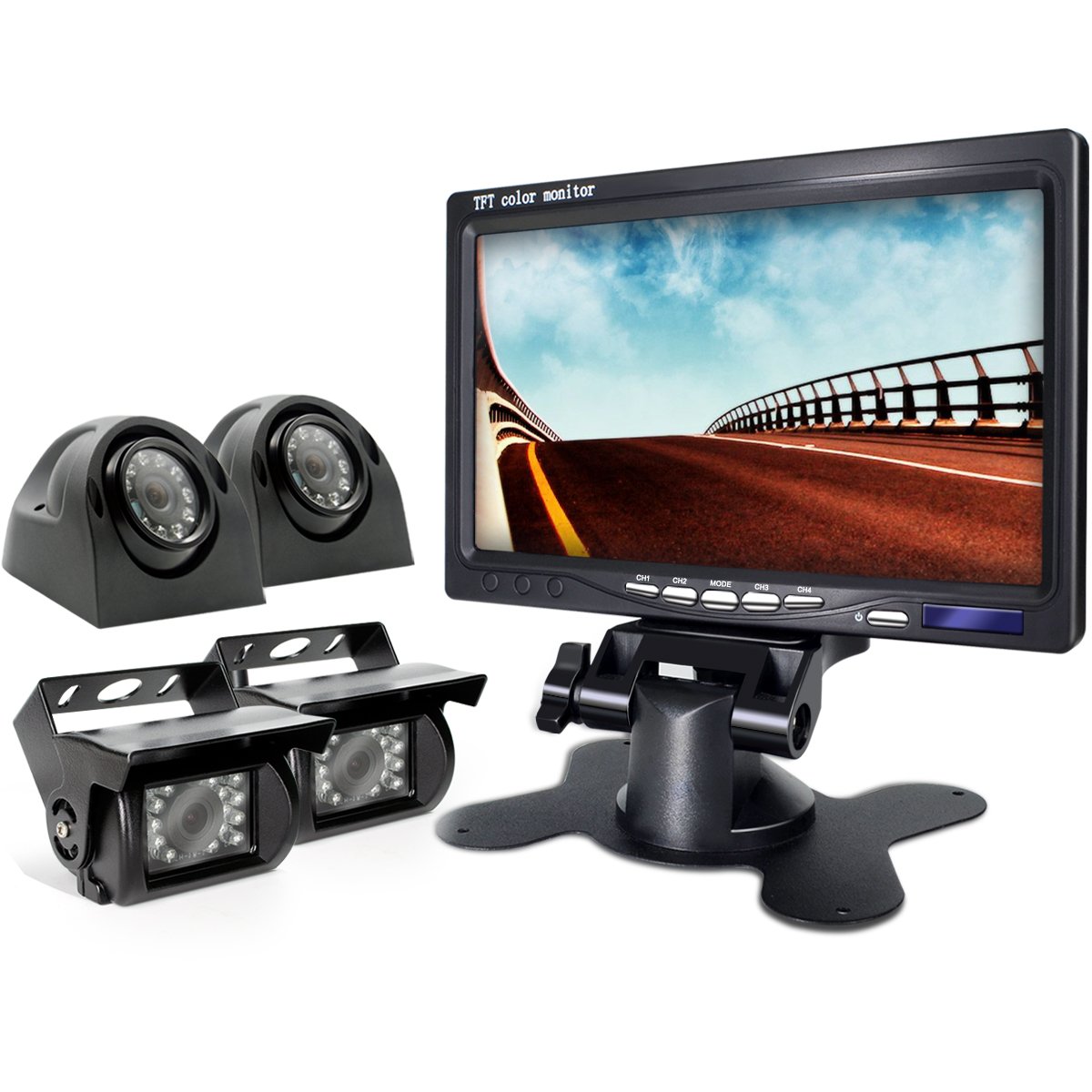 If you want total safety for you and your trailer truck and other bigger than the usual vehicle you use daily, try the eRapta 7” Split Quad Monitor Backup Camera. It has two 67 feet and two 34 feet aircraft grade cable that are included in a complete set of a rear visibility system and can be tilted into a 170-degree wide viewing angle. A truly safe device for your truck. 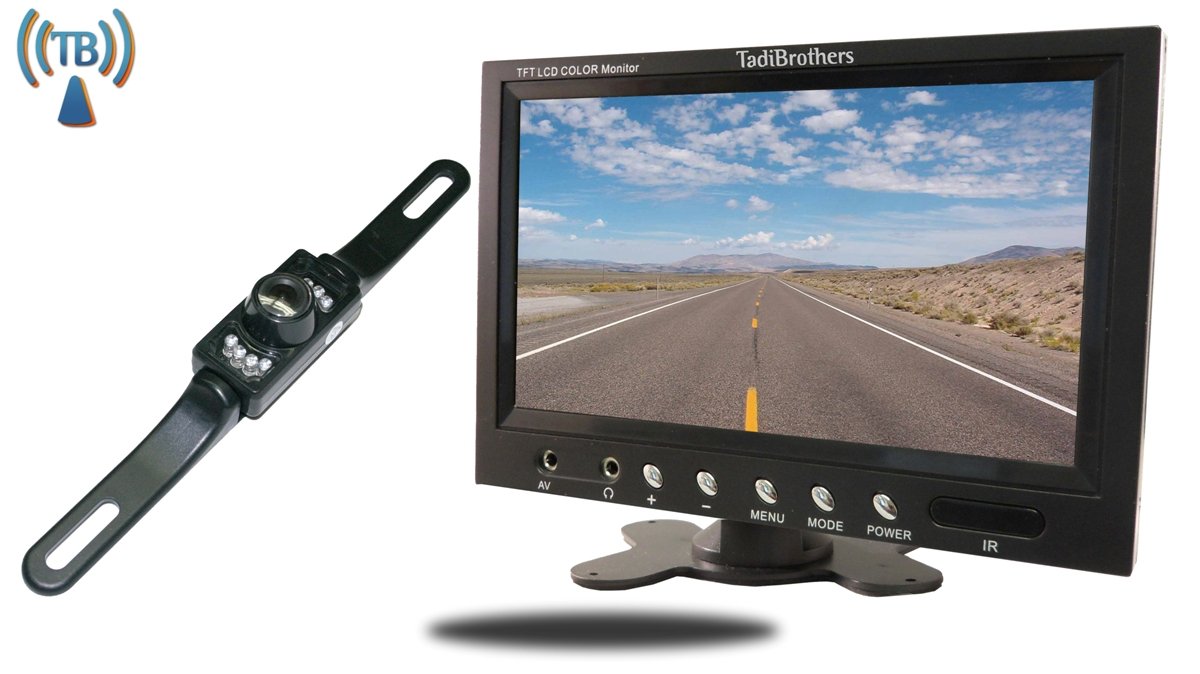 The Tadibrothers 7-inch Wireless Backup Camera has a military grade night vision capability and is fully waterproof and shock resistant that works well with sedans, minivans, buses, SUVs, trucks, and other cars. This TadiBrothers brand is quite unique where its LCD monitor displays images in brilliant colors and impressively high resolution. Every car must have this type of rear view camera and you don’t need cables. 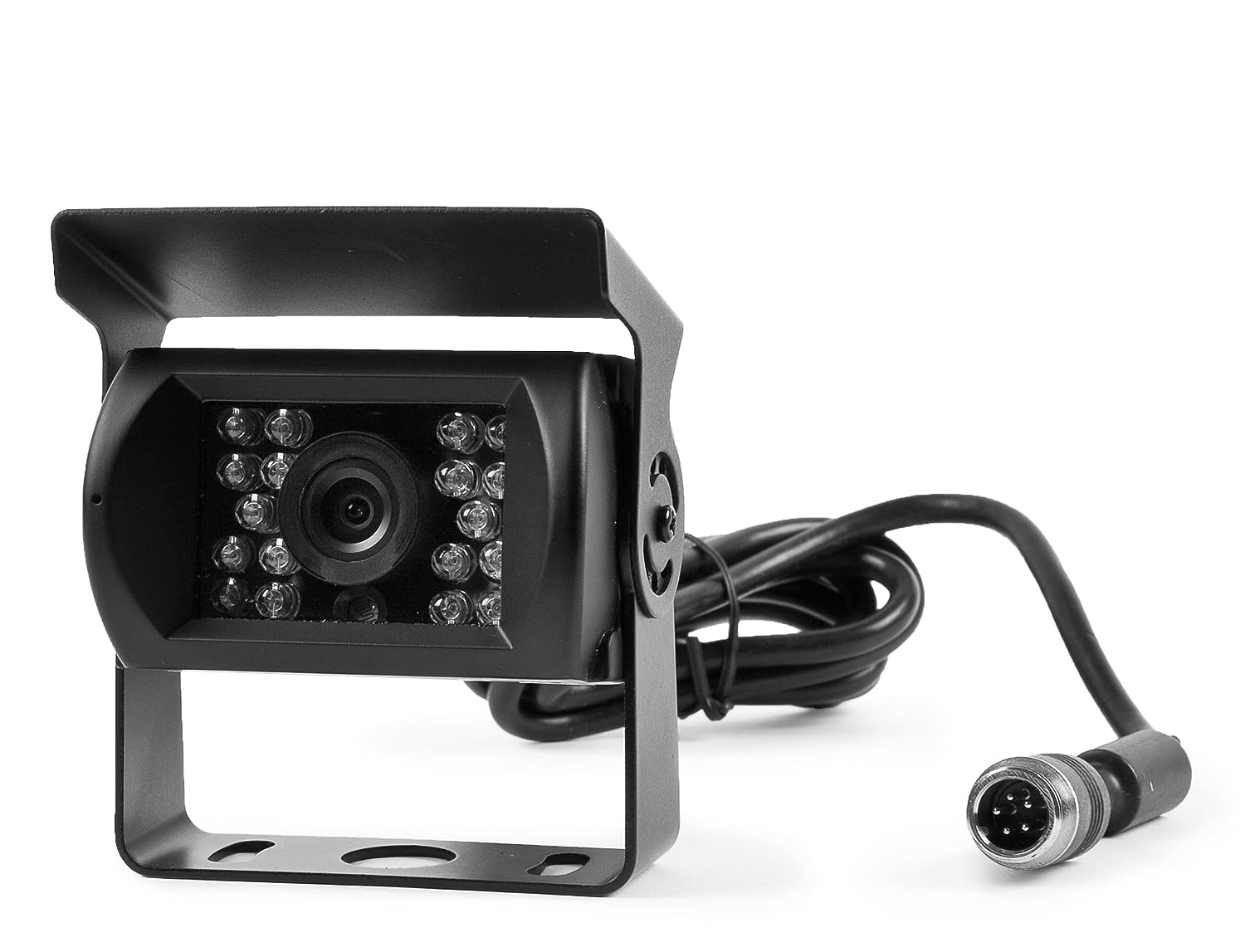 The Rear View Safety (RVS) CCD Backup Camera is a very affordable piece of backup camera that is in mirror image. This product uses the Sharp Color CCD camera technology with an impressive 250,000-pixel capability which is really amazing as it beams up to 50 feet of clear vision even during night time.

See more: Best Dash Cam for Truckers: Choosing the Best One to Buy This Year

As we go along with every product’s amazing features and traits, we settle for the Rear View Safety Backup Camera System with 7" Display (Black) RVS-770613. This product is not the most expensive among the products that we have featured, the reasonable price compensates for its immense features.

This one has a wire capability, night vision, easy to install, could be used in various applications, and easy to use, among other great features.

Sure enough, this R﻿ear View Safety Backup Camera System with 7" Display (Black) RVS-770613'﻿s striking display of images on its 7-inch monitor is undeniably splendid and just what we need, we are certain that it’s worth every penny of our investment.

Best Dash Cam for Truckers: Choosing the Best One to Buy This Year

How To Install A Wireless Backup Camera

Picking the Best 6×8 Speakers: How to Choose the Right One?

Westlake Tires Review: How to Choose the Best Tires?