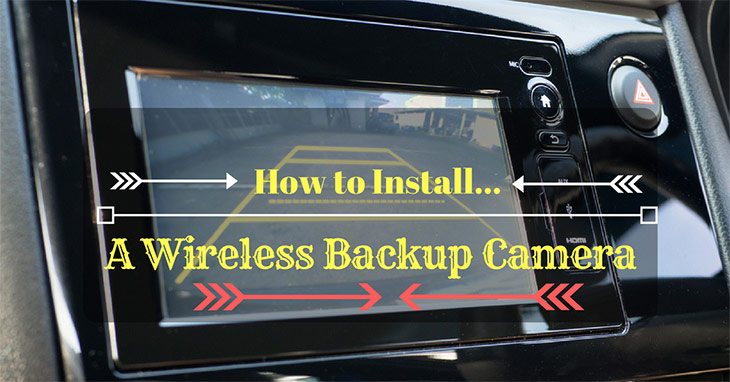 How To Install A Wireless Backup Camera

In recent years, we have seen the integration of technology and automobiles more so than ever before.

However, just because you don't own a modern car with all the advantages of technological innovations, that doesn't mean that you can't enjoy some of these even driving an older vehicle.

Moreover, there is talk that the rearview backup screens and cameras will be a must on all cars by 2019.

How to Install a Wireless Backup Camera
What you'll need
Ready to Go! Furthermore, it is a very practical way to cover the blind spots present when you look back the typical way, especially if you're driving a high car or truck. Ideally, it will help you see if there is a kid, a small object, or anything else behind you while you are backing up.

With affordable models being sold on e-bay and in any car accessories shop, anyone can enjoy the benefits of the rearview camera.

With this tutorial, you will learn how to set up the best wireless backup camera and have it fixed up perfectly with a few simple steps rather than paying someone to do it.

Note: You can buy them on Amazon.com Firstly, start by removing the screws on your license plate and remove the plate. Mount the camera on top of the license plate. Depending on what kind of camera you're working with, the mounting options will differ.

Some cameras have a panel with screw holes included so that you can affix the camera over the license plate using the screws. Other versions can be mounted like a paper pin on top of the license plate.

Further, some users prefer to use what are called pin-in-hex screws which are special kinds of screws that are less accessible to common screwdrivers.

This means the usual thief will have a much harder time attempting to remove the screws. In any case, once you have the camera tightly mounted onto the license plate, drive the screws back in, and you've successfully mounted the backup camera.

Next, you will need to work the camera's wire into your car. There are different approaches considering the car you're working with. Some cars will have tiny openings behind or above their license plates which you can drive your wire through.

For other cars, routing the wire through can be a bit of a challenge. Some users opt to drill a hole behind or near the license plate to fit the wire through to the cabin. Ideally, as little of the wire should be showing for aesthetic effect.

Most people prefer not to have a protruding visible wire on their car's exterior. The truth is, there is no one standard way to do this, so don't be scared to get creative! Step 3: Powering up the camera

So now that you've gotten the wire into the cabin, you need to connect it to a power source.

The perfect power source is the wires that jack up the reverse lights in your backlights, which are only powered up when you hit reverse on your transmission.

Therefore, the camera is only powered up when you are backing up your car, which is exactly what we want.

As for actually connecting the wire, you will have to remove your backlight covers. Using a pair of pliers, connect the camera's wires into the positive and negative power cables.

Step 4: Connect the camera to transmitter

Now connect the camera to the transmitter, and you're pretty much done with the hard part. At this point, you can also put back what you detached from your car such as your backlight covers and panels on the inside of your car.

The two connections that need to be made are the two RCA cables. These are the yellow AV output and the black one for power. You can take care of any visible or messy wiring using small cables ties for wires and fit the wires behind the inner panels of your car. Step 5: Place the screen where needed and power it up

Now that you're all done with the camera, you can attach the screen around the middle of your dashboard or anywhere of your choosing.

Different car sizes and different types of dashboards will offer some choices as to where the screen should attach. Ideally, it should not be obstructing your view of the road in any way but should also not get in the way of any needed hardware such as the radio.

Some screens will have built in receivers and others will have separate receivers which need to be attached. These will pick up the signal when you hit reverse since the camera will begin transmitting video.

Finally, connect the screen to a power source such as the cigarette lighter plug or an external power source (some products will have these as well).

Step 6: Test everything out

Now that everything is set, hitting reverse on your transmission should instantly give you a rearview display on your screen.

You'll also want to make sure your camera works well when it's dark. The best backup camera with night vision will work as to give you a clear display even in the darkest areas.

You will also want to check how clear the screen's image is. Is it too pixelated or does it look just right? Some screens will have a visual aid of lines to help you parallel park too.

Also, check if your reverse lights are working considering that you used their wiring to power up the camera. You may also want to adjust the camera vertically to give you the best angle you're looking for. And just like that, your camera and screen are set up and ready to go. You can now enjoy the safety measures provided by your rear view camera, and the parking convenience it provides.

Moreover, some screens can be used as GPS screens while driving normally, and turn into rearview screens once you hit reverse.

Best Dash Cam for Truckers: Choosing the Best One to Buy This Year

How To Wire A 50 Amp RV Plug: Here Are 5 Quick And Easy Steps

Reviews Of The Best Double Din Navigation: Which One Is The Best?

Our Top Pick For The Best Backup Cameras With Night Vision